Eventually after months of product research and testing, Passion Flots has gone ‘live’ with a lovely website and PDF’s for the Rosettes, as well as our Facebook Page ‘Passion Flots’. If it was difficult to produce everything in one language, it has been a nightmare in two languages – but we are very happy with the result.

Pompadour
At the Sighthound Special in September in the wonderful setting of the National Stud within the grounds of the Chateaux at Pompadour, Passion Flots made its presence known for the first time and we took the exhibition stand.
Because I had also entered four dogs for the show, I didn’t have time to take any photos (not a good Marketing strategy). It was very hot for the show on the first day, but was too windy to erect the stand on the second day (or that was the excuse, because we were exhausted).

Whippets topped the entry with 140 dogs, leaving a very capable and infinitely patient Felicity Thompson of the famous Barnesmore kennels to judge the C.A.C.S. eligible dogs, whilst the youngsters were given to Monsieur J. Bardot to assess. 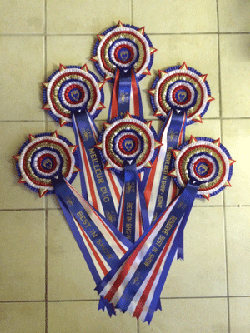 Passion Flots had donated six enormous ‘Pompadour’ Rosettes for BIS and the other Bests, and in conjunction with the French Whippet Club we also donated 1st to 4th for the show classes, 1st to 6th for all the Coursing classes and then all the Bests, C.A.C.S., C.A.C.P etc.
Personally after a terribly hot summer where even my youngsters refused to budge from the sofa until a cooler late evening, I was delighted to win 2nd in Veteran with my Champion Coco. She was beaten by the eventual Best Veteran in Show ‘Foreigner Deneuve’ owned and bred by Emmanuel Rigaud, who tragically left this world just a few weeks later. 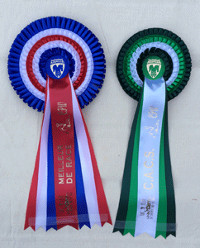 Frederic was forced to show our Puppy ‘Squirrelwood More Than a Dream’, because I was in the other ring, but he did well and she got the highest grading of ‘Very Promising’; puppies and babies aren’t placed in France – just graded.
I was more thrilled to win 2nd in the Working Class with a totally unfit homebred ‘Emeraude’ and even more delighted when she won the Veteran Coursing the 2nd day. When we came home that evening and showed our Rosettes to father-in-law, he said we could remove the centre discs and tails and put them back in stock. I gave him an icy stare before proudly fixing them on the wall – there are some people out there that just don’t understand a passion for all things dog!