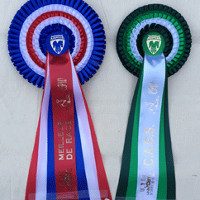 Eventually after months of product research and testing, Passion Flots has gone 'live' with a lovely website and PDF’s for the Rosettes, as well as our Facebook Page 'Passion Flots'. If it was difficult to produce everything in one language, it has been a nightmare in two languages - but we are very happy with the result. Pompadour At the Sighthound Special in September in the wonderful setting of the National Stud within the grounds of the Chateaux at Pompadour, Passion Flots made its presence known for the first time and we took the exhibition stand. Because I had also entered four dogs for the show, I didn’t have time to take any photos (not a good Marketing strategy). It was very hot for the show on the first day, but was too windy to erect the stand on the second day (or that was the excuse, because we were exhausted).   END_OF_DOCUMENT_TOKEN_TO_BE_REPLACED